Take a Moment and Listen…Its Only Awen…

By Tommy Elf in Daily Path, Podcast, Ramblings on November 13, 2013
No comments

Everyone finds inspiration somewhere.  Maybe I should utilize the Welsh word for poetic inspiration instead?  Awen has been described as a “flowing spirit” by Emma Restall Orr (Living Druidry, 2004). 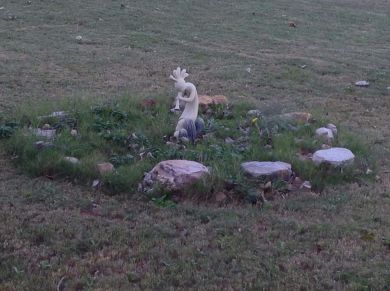 I am both cursed and blessed to be claimed by two Gods – Crow and Coyote. I say cursed and blessed, but the reality is that its really neither. The curious part is that I have two trickster Gods that constantly whisper in my ears – typically one on each shoulder, or so it seems.  About two years ago, these two Gods latched on to me, and have slowly shown me that my life as a Solitary Pagan tends to fall too much towards the serious. Anyone that knows me well enough, knows I love playing out jokes, laughing, clowning around, and generally having a good time. Very few of those people have ever been in one of my own rituals. The few that have are well aware of the very straight-forward and serious way that I attend to my rituals. To those folks, the pairing of two tricksters with me makes sense – a balancing of the scales so to speak. To others that know me primarily outside of my ritual life, its a look that’s similar to “birds of a feather.”  But I am teetering off-course here…Perhaps even Yeat’s description of “fie in the head” – that moment of visionary experience  (The Song of Wandering Aengus) – would be more prudent. Whatever you want to call it – inspiration, Awen, visionary experience, fire in the head – everyone has those moments in their life. Moments of sheer brilliance, where the starry heavens above part to reveal your Life’s Path in jaw-dropping beauty and the limitless clarity of a clear night. And that’s what those moments tend to be – literal MOMENTS.

A few days ago, these two Tricksters decided to impart a point to me – a place where much of my Awen flows from – a form of that spirit in the head. It didn’t help that it was conveyed to me in my Forester, while I was driving home. I have never understood why these two constantly impart moments of clarity and wisdom in places where its nearly impossible to take notes, or in this case – where it can give the impression to other commuters in Flower Mound traffic that I’m completely out of my tree. Thankfully, Apple has a voice recorder built into the software of the iPhone 4s. I probably still looked a little on the strange side talking to myself. That’s all right though – I have never worried much about how other people think about me. I’m comfortable with me, and that’s the opinion that counts with me.

Much of my moments of – BAM, WOW, GOTTA WRITE THAT DOWN – have typically happened while listening to music. My meditations are usually accompanied by the music of Wendy Rule, Craig Chaquico, Enigma, Andreas Vollenweider, or something similar. I also use these same artists as background music when I am reading. My walks tend to go for bouncier music – lately its been Damh the Bard, Jim Faupel, Paul C. Newman, and Kate & Corwen. I carry my earbuds in my pocket nearly all the time. I have an iPhone plugged full of music and podcasts. I have an iPod in my Forester that has even more music plugged into it.

On the one shoulder, I have a push towards digging deeper into the music, to find that Awen entwined in the notes and lyrics of these musicians. On the other shoulder was a quiet statement, one I barely heard at first…

Take out the earbuds. You’re missing the concert

So I did. The last two walks I have taken have been without my iPhone in tow. The first walk was during a light rain. The sound of the rain falling all around was absolutely amazing. At one point, I even shuttered my umbrella, so I could hear the sounds a little more distinctly. I got soaked in the process, but it was definitely a worthy price of admission for that concert. This afternoon, I did the same thing – except that there was no rain. Just clear blue skies. Part of my walking route takes me along the fenced-in pastures of Spirithorse Ranch, where kids with disabilities are given the opportunity to be around and ride some of the most beautiful and gentle horses I have ever seen. Typically, I bring my leftover vegetables for the horses, and feed them at the fence. Today, I had nothing in my pockets, but I stopped at the edge of the fence line for fifteen to twenty minutes. I leaned against the fence and listened to the horses trotting through the pastures – romping and playing like huge dogs. In the background was the sounds of the birds, singing their songs, flittering from branch to branch…all to the rhythm section provided by the occasional gentle breeze.

I have often described my daily walks as “zoning out on the sidewalk”. But that’s always been done with earbuds in my ears with the volume cranked up loud enough not to hear conversations from fellow walkers, and low enough to avoid becoming street-pizza from the awkward driving of the neighborhood teenagers. Without the earbuds, its like hearing a completely new concert. And surely, there’s the occasional disturbance from a car here and there, but that’s sort of like having people talking during the symphony. Eventually the disturbance goes away – and you get the music back again.

All of this has given me new ideas for some sound breaks in the podcast. Essentially little sound breaks to “announce” certain parts of the show. Previously, I had used little pieces of music to provide this. This time around, I am using the music of the Natural world to assist me. I do realize that the podcast is a major change in what I have done over seven years…but the fact that these little changes are being shown to me through a little prodding…well, that makes it even more magical for me. Hopefully, it does the same for the listener as well.

Everyone likes to talk about how sudden that the “Fire” comes on – and the creative process behind it. For my two pence worth, the Fire in the Head is not just about the creative process that is its result. For me, its a lot more than just the output. Its being shown a new to process the information that one has. The output can be something as mundane as a new way to draw up a table in an Microsoft SQL Server database. Its that momentary spark of clarity – when everything sorts itself out and shows you a way to potentially try to gain a result you are wanting. It lasts for a moment. You spend the next few moments getting your brain to claw furiously at the receding result…but it was there. Trust me, I understand…I get a tap from a bird claw on one shoulder and a wet nose nudge in the neck from the other shoulder. I don’t always readily understand…and I have only just begun to realize how to listen. Take the time…don’t be in a rush, I bet you’ll find its worth it.