I love reading really tough topics – particularly heady material that is sometimes way beyond my own comprehension. That’s sort of where I find myself at about the 1/3rd point of Emma Restall-Orr’s “The Wakeful World”. The majority of the terminology is just way over my head, particularly all the Philosophy and Psychology concepts. Neither of those were top four-hundred on my list of topics for collegiate classes. However, I keep trudging through the pages, concepts and material, because there are always small little nuggets of information that I can glean from reading. Take for example:

A century later, Isaac Newton was standing at the centre of that ongoing wrangle between magic, science and religion. Dismissed as a magician by mechanists of his time, he seems to have been a man willing to delve, or indeed dive deep, into any possible well of understanding, seeking above all the ‘seeds’ or forces that were the active principles of creation. (p.74, Kindle version)

Now, this passage from Restall-Orr’s book has next to nothing with the direction I am about to head with it. And if you know me fairly well, these little side-quests of mine come frequently. Its part of what makes reading a book like “The Wakeful World” so difficult for me. Any bit of information can literally have me moving along a line in a completely different direction. Sort of like a Crow going for the shiny object or a Coyote chasing the sudden movement of a rabbit in the brush. Ahhh…life under the vision of two Trickster Gods… Anyways, back to the original side-quest point…

When I read that passage, I started to see how and why I get some of the students that I do in my classes. From the very start of their formative education, the children are taught with each successive year utilized as a building block on the previous one. But each original building block is smaller than the newer one being placed on top of it – until the education model looks like an inverted pyramid. After all, logic would dictate that each successive year was more difficult in objectives and information than the previous one. Stacking each educational building block one on top of the other would create an inverted pyramid, where the senior year of high school would be the largest block, balanced over each previous year of schooling all the way through kindergarten, which would be the smallest block of learning. Think of how unstable that model would be – teetering to one side and another. No wonder I wind up with students whose skillset I question going into a classroom environment where computer use skills and formative logic are the key to success. And then Nature struck…

Yes, I was blind-sided by Nature (sorry Mr. Dolby – I just had to). I realized I was looking at the model incorrectly. Rather than an inverted pyramid, I should have looked at education as a series of concentric circles. Or, as the 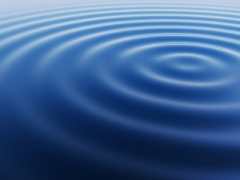 dear old Druid buried deep in my heart laughingly pointed out: ripples from a pebble tossed into the pond. The concentric circle closest to the center would be the newest level of education – small, strong, with a large ridge from the force of the pebble’s entry into the water. The further circles were larger, spread out over a period of experience, the waves not as tall or rigid, just a bit fainter the further they get from the pebble’s entry location. Just as our initial educational training gets fainter in our present minds the further we get from that point in time. The further from the initial point of training we get, the more ingrained our actions become, until we’ve reached a point of doing things automatically – without conscious thought.

The students that I get whose skills are not nearly polished as that of their peers comes from – in my opinion – the manner in which they were taught to utilize and recognize the tool they use:  the computer. Students who view their computers as gaming devices have a tendency to not be nearly as good at writing papers, working spreadsheets or setting up databases as the students who see the computer as a useful device for communicating with others. And this has to do with where their pebble was tossed into the pond, and how much force was placed behind the toss that placed the pebble at that point.

The scary part for me is not that I came to this conclusion – that’s an easy stretch for me. Its the comparison to Nature and the resultant experiences behind simple actions that is the scary part. Here I am, thinking about a modern concept such as computer instruction – and finding a comparison that exists outside of that modern environment. I would even venture to say that such an experience would be completely foreign to a modern computing environment. What’s crazier about that is that the comparison might not make any sense to you – but to me, its absolute perfection. And all because I keep taking the road not travelled or even mapped (apologies to Robert Frost).