Looking Back, Looking Forward…Forgot to Check the Traffic Before Getting Into the Crosswalk

Well, this is it folks.  What?  No, I’m not closing up shop on the blog and the podcast.  No, I’m not packing my bags and leaving the internet.  Hey!  Don’t look so disappointed about that!

Seriously though – this is really the end of the 2014 calendar year. The 2015 calendar year is coming forward in a steady push now. For some people, there’s some trepidation involved with this. Stepping into the unknown, seeing a new Path laid before you, and not knowing what type of terrain you are going to be walking. For others, including myself, its the excitement of what’s yet to come.

What is Yet to Come – Podcast and Blog

So, yes, there are changes coming. The podcast and the blog will share a common theme. I will be working towards exploring who I am and what I believe, exploring that in terms of my Druidry and Paganism without utilizing a Christian backdrop to compare/contrast everything upon. All of this comes directly from a post on Under the Ancient Oaks, John Beckett‘s blog over at Patheos.

Its easy to understand how that will play out here on the blog. On the podcast, I will attempt to get interviews with folks on various topics, but every podcast episode will have a short bit where I talk a bit more about aspects of my beliefs. The idea is not to create a “how-to” segment, but rather a “this is how I do it” segment, and to make sure the segment is no longer than fifteen minutes whenever I have an interview lined up on the show.

There will be other additions. Over the latter half of this year, my life has been turned upside-down with a new job that has an element of two hours of driving (an hour to and hour back). That’s been a bit of a change, and somewhat of a hurdle, as I try to change the way I handle other aspects of my life (my walks, my meditations) into it. Its also bit into my reading a little more than I cared for. However, I have started reading more via my Kindle – and have started to amass a decent Pagan book collection there. As I finish these books, I will include a segment on both the podcast and here at the blog concerning the books I read. These authors work hard on their works – and while I have a small readership and listenership — the best thing I can do for these folks is to showcase their hard work.

The last addition is something I have been toying with over the last two years – a Google-Chat Hangout. Just an hour or so video hangout – once a month – where the topics are completely wide open. I’m not the Shell Answer Man…but I figure it would be fun to have a place online where folks could come and talk about…whatever. Pagan topics, sports topics, whatever is happening topics…anything. And if I just sit and stare at a blank screen for an hour…so be it. LOL

Stopping and Looking Back

So, let’s take a short look backwards into 2014. I was a bad podcaster. For the coming calendar year of 2015 – my goal is to produce more than twelve episodes for the year. I came nowhere close to managing that in 2014. My bad — ::holding out wrist to be slapped:: . But I did manage to get two interviews into the space – one with John Beckett, and a second one with Troy Young, who was one of the folks I worked with over the last two years on the Pagan Pride Day project. I thoroughly enjoyed having Troy on the show – as he dropped by the house for that interview. While I did not finish the year working with the Pagan Pride Day folks, I did attend their event as a guest. They did a wonderful job – and it was also a lot of fun to see some friends that I had not had the chance to be around for some time. This coming year, I am making plans to attend the Austin Pagan Pride Day event – and possibly the Houston event as well. Perhaps, I might make it into Oklahoma for theirs as well. It all depends on how my work schedule shakes out for the coming year.

And then there are all the new friends and people I have had the pleasure of meeting. So many people. I’m not even going to do the injustice of naming names – I’ll just say that I am excited about the Pagans that I have been meeting. Very open-minded people who love to laugh and talk! And good Gods can some of these folk talk!! I am just amazed at the folks I get to meet – from the outgoing and open to the very shy and all personalities in between.

What is Yet to Come – What I Already Have Scheduled

The coming year will bring some interesting moments for me. Right around this current time frame (late December, early January) in 2015/2016 – I will be taking a trip with the college I work for. That trip will be a tourist jaunt to Scotland and into England. I have already confirmed the time frame and have started paying for the trip at this point. So, I will be headed back to England for the first time since the early 1990s. I know I will be in for a major shock at the differences from the last time I was there. There are already plans to attempt to make it to Glastonbury for a Summer Solstice in 2018. But that’s just a ways off…

Because my job affords me vacation time, and I have a set time frame of work — I will be able to attend more gatherings. One of these is OBOD‘s Gulf Coast Gathering this coming March in Louisiana. This will be the first time I will be around a large number of OBOD folk, so I have a slight bit of nervousness. Plus, I get the chance to meet Brendan Myers. This past year provided me with a wonderful moment with him. I had purchased a copy of his “Dangerous Religion” through an online used book seller. When I received the book, it had an inscription that seemed somewhat personal, and had “Brendan” as the signature. I contacted Brendan and asked if the inscription was his, and if he wanted the book back. He noted that it was his, and graciously offered another book title in return (which was unnecessary, but I gladly accepted). I’m looking forward to meeting him face-to-face and see if he remembers the transaction. 🙂 I was also hoping to make Pantheacon this year as well, however, once the England trip arose – the funds were quickly diverted to that. So perhaps next year. I do have my sights set on Gaia Gathering in 2016, and a possible journey to Fairie Worlds as well. Again, it matters how the schedule shakes out and how funds are at that time.

And So Ends the Calendar Year

…and with that, you have my look backwards and forwards. It looks a little hectic (it is!), but there’s a measure of excitement for me as well. I still have my Druidry studies to move through – now with a more excited and dedicated pace (thanks Cat!). I hope that you have a wonderful step through the veil of the calendar year – and find your feet firmly on your Path – whatever it may be. I look forward to what this new calendar year is about to provide…. 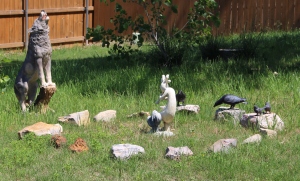