Yep.  Its been a while. Which means there’s been a lot going on. Some of it was good.  Other parts of it..well, let’s just say I would rather not have fallen out of the back of the moving truck and landed on the driveway face-first. So let’s get that out of the way first, shall we?

Most of you know my father passed away suddenly around a month ago. Since then, I have been out to the house three separate times to move furniture and other items out before the estate sale. Well, last weekend was the final time to move larger furniture items. Once I had movers put those items into the truck, I went about the task of tying things down with rope and bungee cord. I dropped a bungee cord on the ground, and decided to step down out of the truck to get it. I moved my foot backwards to stand on the bumper, shifted my entire weight at the same time…and missed the bumper. My entire weight shift pulled me out of the truck, and I landed face-down on the concrete driveway below. A drop of about two feet, but an unexpected one. I tried to brace myself with my right arm, and fractured the ring finger on my right hand. I also skinned up my right forearm very nicely (read: bloody), and hit my head directly on the concrete driveway. Thankfully, it wasn’t much. It definitely could have been much worse. Needless to say, typing and signing my name with a broken finger on my dominate hand is somewhat comical to watch. Anyways… 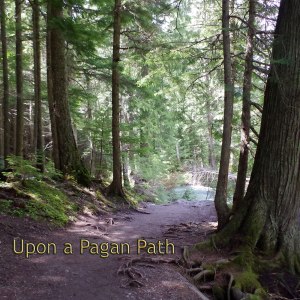 I saw a news report that was pushed to Facebook by Troy Young…I’m too lazy to get it at the moment….but it alluded to the idea that walking in the woods is a great way to essentially refresh one’s soul. Or something like that. Hold on a second, let me find it and paste it in here. (Yes I talk while I type) Its actually a blog post by Tess Whitehurst over at Witches and Pagans and is called “How Simply Taking a Walk Can Activate Your Intuition and Magical Power“. The post is an interesting read – but it reminds me how far away I have gotten from something that is a major part of who I am – my daily walk.

Where I work, I drive nearly an hour one way to get there.I spend a little more than eight hours there. So added with the commute, that’s ten hours out of my day. That makes walking through my neighborhood a little dicey. When I was an adjunct and could walk at whatever time in the late morning or early afternoon that I desired, I could choose times that were a little less trafficked by vehicles. Like any neighborhood, there are a multitude of streets that I have to cross, and all are heavily populated with vehicle traffic in early morning and early evening hours. I sincerely wish that there was a walking trail on my side of the interstate (our “city” is split by the interstate). And then my weekends are sometimes very heavily populated with things that have to get done – which takes away more of the time I want to go walking with. Since I can’t seem to talk the Gods into adding a few more hours into the day – I have to literally ask myself: “What the Nine Hells is a busy Pagan to do?”

These four phrases are my gentle reminders that sometimes the Path doesn’t look the way that I would always want it to. Instead of warm, green grass or the gritty feel of sand and dirt punctuated with an occasional rock – I may have ceramic tile or industrial-brown carpet underneath my loafer-encased feet. Instead of a clear blue sky peering between the brown and green dome of tree branches above, I may have fluorescent light fixtures plastered against an anti-septic egg-shell white ceiling. I may not be able to do the awesome tree meditation in the video below…but I can easily stop, step to the side, close my eyes, and find my Inner Grove.

There’s plenty of stuff in the news, as well, that gives me a very similar “unbalanced” feeling. Police brutality. Nutball politicians on the Left and Right side of the political spectrum. Crazy legislative measures that seem to be aimed at fracturing the Constitution of the United States through thousands of small paper cuts. All of that erodes the small barriers I have put up for sanity’s sake. At some point, I can literally hit my knees, look up at the sky, and plead with the Gods to pull me into the land of the Fay, far beyond the reach of these humans that seem bent on gathering power to themselves to subjugate and diminish those that they disagree with. And when I finally feel like I am totally out of control, these four words get whispered into my hearing.

There’s another thought that comes to mind as well:  pick your battles. I can be outraged over police brutality in places like Missouri and Maryland. But I am in neither place, and its not likely going to do any good or be helpful for me to find the nearest Denton County Sheriff and get agitated with them over it. I can be outraged by whatever thing a politician may do, say or advocate. The real measure of my “voice” doesn’t come from some idiotic meme on Facebook, but rather by going to my local polling location – and voting. For instance, my city is about to elect a new mayor. I have read up on the candidates, and do not like any of them. But rather than staying away from the polling location, I will show up and vote – leaving the mayor election blank. There are, after all, other measures on the ballot too. The matter is not just getting out and doing, its also a matter of understand where your own limitations are. Finding the Center and the Balance.

So what am I about to do for my walks? Well, I can’t walk every day like I have done in the past. I will have to pick my where and when – and work more within my meditations for those times when I cannot. I might not be able to get out into the woods or even the neighborhood on as regular a basis as I have done, but that doesn’t mean that my connections to my environment are gone. And its those connections that I need to focus on and work with now.

What I am Reading