Thoughts on a Future With Paganism

The Past.  We’ve talked a lot about that throughout the blog. We’ve also talked a little bit about the Future. Sort of. There are blog posts out there about the next ten years, the next fifteen, the next twenty. What will be the state of Paganism at those points? How can we possibly steer our current state of Paganism towards the goals so far down the road? This morning, this was on my mind as I was trying to write this blog post. I had no idea just how I was going to write this. During my second cup of coffee, I decided to meditate for a bit on the topic. 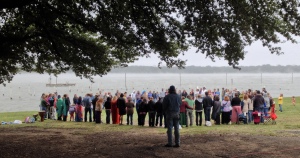 I turned it over and over in my mind. What would I like to see Paganism be like in the future? Well, there’s the obvious – a little more into the mainstream, a religious alternative that is treated as being “serious” by the everyday person – not just the Pagan practitioners. And as I struggled to move forward with my list, a small voice whispered out of the dark trees at the edge of my Sacred Grove:

What if you don’t have that much time?

What do you mean?  Me?  I am nearing 50, an age I once that was ‘ancient’. Then I realized, it wasn’t a literal you, but rather a wider ranging you – meaning all of us. And the hamster start trotting faster on the wheel in my head.

There are a lot of ways to place out this scenario of not having a lot of time. Each one, is a doomsday scene in its own right. What if the Conservative Christians get power here in the United States, and force law changes that put my beliefs in a position of being illegal. Yeah, I know – very “Left Behind” in thought – however as unlikely as it seems, there is a degree of plausibility. Then there’s the thought of global warming, famine, global unrest over natural resources such as drinking water — Pagans are a minority belief system. When resources become scarce, how long before the thought of one group of people over another for resources begins?

There is another way to view this, in my opinion. We can dream about ten-plus years down the road and how Paganism can be set forth as a vanguard towards respect and care of our planet. I truly believe that this can happen. However, the true start of the future is today. The steps we take today are the ones that echo into eternity.

We have people creating strife and chaos in the name of their beliefs. To my Christian friends, I apologize for painting with a broad brush here, but it helps illustrate the point more clearly. We fight wars in the name of the Christian God, the Jewish God, the Muslim God…why? To spread the dominance of one belief system over another? Really? That’s no different than killing people simply because they are black or Jewish. That’s been done before…and the results were outstandingly disturbing. We fight wars over resources, because those resources give our nation of people an advantage over others. How long before we start having wars over the control of fresh drinking water? In all honesty – not long.

What can we do? How about living our lives as Pagans. You don’t have to claim the title to live the life, ya know? Care for our Earth, find ways to use reusable product packaging, look into sustainable farming for your backyard, be kind to your neighbors, be kind to strangers, be your beliefs. You don’t have to make your neighbors believe in the Gods, the Goddesses or the Spirits of the Land. They can still be Christians, Agnostics, Atheists or whatever – but we can show them a better way of living by following some of our own principles where Mother Earth is concerned. We can show that hunting is good, but over-hunting is a terrible thing. That hospitality is not dead — its just merely slumbering underneath the skin of everyone.

Yes, we are looking to the future of our Paganism — seeing young adults coming to Paganism, and embracing its principles. But those same principles are being embraced by other beliefs and their adherents as well. Its true, we may not have that much time. But I am optimistic enough that I believe that change is about to start — that Pagans have the chance to lead the way into the future. We Pagans of today may have to take a hard, bloody stand against those that view the Earth as a resource to be used, as proclaimed by their holy scripture. And that stand may be here sooner than we think…but there is a foreseeable future, where we work together to make a planet that will be the home of future generations to come.

I am the voice of the next generation…
…Start a revolution now!
–Amaranthe, Digital World

2 thoughts on “Thoughts on a Future With Paganism”