Taking a Step Forward – the Pull of Gods, Goddesses, and Place…

I have always been drawn to certain things – certain ideas – certain places. Oddly enough, many of these things are not related. Crow, Kokopelli, Borrum, Artemis…all Gods and Goddesses that have approached me in one form or another. Glastonbury Tor, Externsteine, Mesa Verde, the northern Rocky Mountains and Tai Chan — each a location, nothing like any of the others. 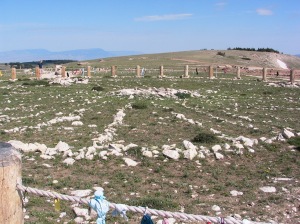 Medicine Wheel in Wyoming…one of the most magickal and alive places I have ever been.

Taken altogether, they seem strange placed together – and yet they all make up a part of my own personal Paganism to one extent or another. Each features prominently on my bookshelf – except for Artemis, which is a new approach for me as of a few weeks ago – and I have actually designed more then one vacation around a few as well. But what is the common thread?

That really is a tough one to bring about for me. Each is very different, unique in their own right within my mind. A friend of mine suggested that the common thread was me, which I nearly dismissed immediately. Why would someone like me be the central focus? After all, I am just myself – nobody extraordinary. However, the point has some merit, particularly if I remove the idea of individual celebrity and focus instead on each particular topical point providing a needed focus on what makes me who I am.

Which brings me back to something I have been thinking about for quite some time — as a solitary Pagan, how do I go about doing all of this? Where do I get a mentor or do I even need a mentor? If no mentor, where do I find people walking along a similar Path to what I am studying at that moment? Would they be willing to advise me? This is a particular concern when it comes to First Nations information here in the United States. It can be a very touchy moment when trying to query a First Nations Shaman about their own practices.

In the end though – I realize what pitfalls may arise in my study of these varying perspectives, and working with different Gods and Goddesses. But the draw is there – its not anything I can place my finger on — and its not really anything that seems to be “cool” — let’s face it, Kokopelli is a very, very strange God to deal with in the first place. I have to work towards each one, a step at a time. Listen, watch, learn…and where I can find someone to discuss these things with, there’s that avenue as well. And despite some of the potential pitfalls, I have to wander these Paths. I am not completely sure of “why” — though the pitfalls that I incur may actually be the “why” — but I’ll never know, so long as I stand at the crossroads of each Path and contemplate the whys and why-nots.

Sometimes, you just have to take a step forward…

2 thoughts on “Taking a Step Forward – the Pull of Gods, Goddesses, and Place…”