Well, Pantheacon 2016 is certainly everything that it has been made out to be…and much more. There are Pagans and Pagan-friendly people EVERYWHERE in this hotel. And its not a small hotel either. There are Pagans of all types here, I’ve met folks of neaarly every Spiritual stripe, and there’s no need to get into sexual orientation, skin pigmentation, hair color or eye color. Because all of that obviously does not matter. Everyone is friendly, smiling, and having fun. And for a people watcher person like me – its an awesome site to see and comprehend.

Seriously. Many people discuss this place like its a wild circus or something. The closest thing that has happened to that – the Krampus revellers that passed by me on Friday night. They were loud…and HAIRY. But it was a seriously fun moment for me. It caught me unawares, while I was eating dinner in the lobby area – and it was just a moment that was out of whack. Flat out fun.

But the one thing that has seriously impressed me is the number of young folks here. And when I mean young people, I mean people below the age of eighteen (or at least seem to be that young). Seeing young people getting involved in their Spirituality, and taking it seriously is heartening to an old fart like myself (who is a spring chicken at 50 when compared to some of the other attendees here). I can definitely see that the younger generation of Pagans are looking for ways to build upon the Paganism that is being offered to them by the older generation (myself included).

And I have met other folks as well. One of the panel security folks that I talked with on Friday night was a former military member – and joined the military after I got out. We talked about how Paganism has been in the military during his term. It was seriously awesome to hear how the military has expanded its awareness of who and what Pagans are – and to some degree have become a little more accepting of this. Essentially, what I was getting a look at was how things have been built upon from the work that I (and others) had done when we were in.

Its that utilization of the building blocks of the Past by those in the Present that really tugs at my heartstrings. These folks don’t have to piece together a Past to build for their Future. They can mold and shape what is already there. And it totally freaks me out to think of myself as an “Elder” or even as a “Leader” of anything. And yet, here I am starting to realize that I am both of those – regardless of what I think. 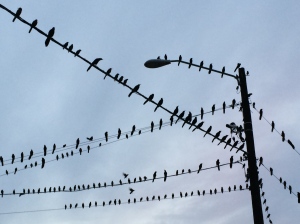 So far, I have sat in on a few panels. Each presenter has provided their points of view with interesting clarity, sometimes punctuated with bawdy and somewhat irreverent humor. But everyone has been spot on with their messages. From the darker aspects of Druidry to Finding One’s Personal Magick to an academic (and fun) exploration of the Dagda to a wonderful talk on the Welsh Gods and Goddesses, the underlying message is clear – Paganism is alive and well in our modern world society. For some it may not be growing fast enough (or at all) for where they live, for others it may not be growing quite the way that they would wish it to…but rest assured it is alive and well.

That means that some of us (particularly myself) need to get off our asses and step into roles of leadership. That’s a particularly difficult perspective for me – an INFT on the Briggs/Meyers test – to assume. I’m a naturally introverted individual, preferring to handle aspects of my Spirituality as a solitaire practitioner. But, as I am learning – being a leader does not mean that I would be leading rituals.

Let me be honest here, I SUCK at leading rituals with others involved. I am not the greatest at facilitating for others. And I know this. It is something that I will have to work on. And there are two workshops that I chose at this convention that are my first baby-steps in that direction. But there are other ways to be a leader or even a mentor. I can talk with folks that are new to their Path, reassure them that their new found connectedness to the world around them is not some form of mental illness. I can talk about some of the missteps and pitfalls I have encountered on my long strange trip (that its been), and commiserate with those that have stepped in dog-shit elsewhere on the field. I can continue to talk about my Paganism, and my Druidry here on this blog – where others can read it. I can continue to bring the stories of others to the podcast – so people can see that they are not alone. And most importantly, I can stop running from the concept of leadership…I don’t have to be the captain of the boat to be a leader.

I heaar the heavy breathing of the Wolf by my side. I feel the strong grip of the talons on my shoulder. I hear the laughter and sweet whisper of Fliodhas coming from the edge of the forest, enticing me to come and wander through the trees hand-in-hand. But I also grasp the undercurrent of what all three say from time to time – stop hiding in the shadows. Step forward and be what you are supposed to be.

Whether I like the idea or not, I am a leader in this vast Pagan community. And while I have not noticed the younger generation coming to the fireside over the last few years – they are here. And they are watching. And learning. And growing in their Spirituality. My time of resting and being stagnate is over – I either step forward or get out of the game. Stepping forward is where I am headed. What about you??