Skip to content
Tommy Elf Daily Path, PantheaCon, Ramblings, uncategorized February 17, 2016
Some of the things that I noticed while at Pantheacon – the people were all smiling, talking, discussing things and having fun with one another. The smiles were real, the laughter not faked, the hugs were loving and kind, and the fun was authentic. Its such a different experience from daily life. Where people that work together, find reasons to barely tolerate one another. Where everything is a competition as people climb the corporate ladders of their lives. All hell-bent on getting bigger paychecks so that they can spend more in a consumer-driven society where over-consumption is the name of the game.
I ddidn’t see that among the folks at Pantheacon. While I was an outsider here (this was my first time here), people were friendly. Willing to converse about who they are, what they believe, why they came here. They were not guarded in their responses. They didn’t couch their language in generic language, letting the listener decide what things may mean for themselves. No, here people shared freely, openly, with no free of rejection. Pantheacon is a safe zone for discussions such as this to take place. I wonder how long it would take for the rest of the world to act this way?
Or could the rest of the world get to this perspective? It sometimes feels like the rest of the world SHOULD be able to get to this perspective fairly easily. But, there’s also the acknowledgement that not everyone will ever accept that every human being has a right to their own beliefs. Just as there will always be people who believe that blacks will always be the inferior race, even after they are shown that pigmentation is more generated by where your ancestors came from – its a matter of adaptation to one’s environment rather than something that seperates human beings into different subsets that are inferior or superior.  But I digress (as I often do).
Can the rest of the world come to a point of acceptance of everyone else’s faith? Can we eventually get to a point where people are not defined by what they believe, and are instead defined by their actions and deeds? To be honest, I may be the wrong person to answer this question. Looking forward into the future, trying to divine how human beings I have never met will respond to such a difficult issue….that’s really not me folks. I have a hard time planning for anything further down the line than a year from now. And even then I get nervous about doing that. But then again, maybe I am the right person to answer this question.
Or, if you prefer (and I do), maybe I am ONE of many people who are the right folks to answer this question. During Kristoffer Hughes’ talk on Welsh Gods and Goddesses (and again during his “Cauldron of Transformation” presentation) he made a notation of how each of us is responsible for our own individual “Pagan Square Mile” (I am paraphrasing here). Each of our single square miles are ours to handle and maintain on our own. If we approached issues that affect us on a global, social scale – if we approached those from the same perspective, we can effectively spread ideas such as these as a united core of individuals. And in this manner, we can effect change…even on the most difficult issues. Because the united voice is louder than the divided voice.
Seriously, what I witnessed at Pantheacon was incredible. Just as incredible as what I have learned from the various panels I attended. The people here at this convention were nothing short of amazing. And they are only a small part of our entire world-wide Pagan community. There are many others out there that cannot attend. That doesn’t make them any smaller than the folks here – it makes them no different than the folks here. All it states is that those folks didn’t have the means to get here. But they are a part of the conversation too. They are a part of the equation of change too. To ignore the point that their voices matter in this would be the wrong idea.
We certainly have a lot of minds to change. Most of the Christian perspective gets taken up by the very loud, very small Conservative, Ultra-Right folks say. Theirs is a perspective of hate. Theirs is a perspective of gaining power over others – particularly those whose religious perspective does not match theirs. And while they are small in numbers – they are very loud, and hard to ignore. Even more so, they will be difficult to win over. Sure. It looks nearly insurmountable. We aren’t going to change their attitudes or their perspectives. Not right now. But patience will win out. Its not a matter of “winning” the battle – rather its a matter of changing their perspective. Helping them to understand that everyone has the right to choose how they believe, what they believe. They won’t change their attitudes over night. That doesn’t mean we should stop. Nor does it mean that we resort to their level of decorum either. 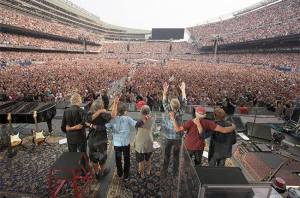 How do we solve the world? Not sure there’s a way to solve, but the start is certainly found in a statement that drummer Mickey Hart made during the Grateful Dead “Fare Thee Well” concerts in July of last year. “The feeling we have here — remember it, take it home and do some good with it. I’ll leave you with this:  Please, be kind.” This morning, those words echoed in my mind the moment I woke up, and that is not something that happens often. When phrases stick in my mind the moment I open my eyes, I pay attention.
My two phrases were:  “How do you solve the world? Through patience, kindness, and understanding.” and “What drives that solution? Determined, deliberate action.” I am starting to see how I am going to cultivate my Pagan Square Mile. How about you? Have you given thought to that yet?

7 thoughts on “The Pagan Square Mile”