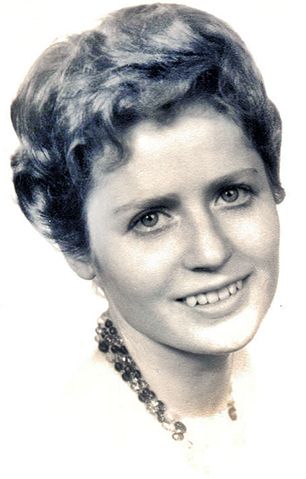 Today, March 1st, would have been my mother’s 75th birthday. Sadly, she passed away in September of 2014. Instead, this will be the second year where I celebrate her birth after her passing beyond the veil. I’m fifty years old – and turn fifty-one this year. Even at my age, its hard to understand a life going forward without her.

My mother and I were certainly not close in my adult years. My latter teenage years were quite trying, for both her and myself. I wanted to live my life in the manner I thought to see fit. She had other expectations of me. Every visit to my parents was a contentious time for me. Her tacit disapproval was always on the edge of being displayed the moment I came in the door. Her sarcastic responses to any attempt to reconcile the difference between our ways of looking at the world, were enough to have me providing excuses as to why I couldn’t travel a short four hour drive for the holidays.

The last three and a half years of her life were heart-wrenching to watch. She suffered from dementia. When I would come to my parents’ home for a visit, she rarely called me by my own name. I was soon either my father or my son. My name would eventually come last in the statement, followed by a terse “whatever your name is”. I laughed those moments off, pretending it was a cute moment, so that neither of my parents could see how difficult it was for me to hear that.

The last year of her life, I rarely spoke to her – even on the phone. My father, who I was never that close to my entire life, soon became my sole connection to her. I checked in far more frequently than I had ever before, spending time in idle conversation with my ultra-conservative father trying to avoid any topic that might set his topics into how “liberal” I was – and how that was destroying the country. Then came the morning of September 17th in 2014. My phone rang, and I noticed that it was my father. My heart sank, as I thumbed the phone over to answer the call. I knew that my mother had passed beyond the veil.

My mother did not want a funeral. She didn’t want a visitation. She didn’t want anyone crying over her passing. My father had the exact same wishes when he passed away on March 16th of last year, another moment in time I will be dealing with. When my father passed away, I found out that he had never interred my mother’s ashes. After my father’s cremation, I was the only family member there for their interment. They were placed side-by-side in a facility on-site at Hot Springs Village where they lived.

Like I mentioned, I was not close to either of my parents at the end of their lives. But not being close does not imply that I did not love my parents. I loved them both very dearly. Our disagreements aside, they were my parents – the direct linkage to the rest of my family tree. To limit our extremely loud and angry disagreements, I kept my distance. Most likely it made things a lot more civil between us, even if the distance it created was enormously wide.

After her passing, it took me a good four months to process her passing. The finality of it hit in February of last year, and I was able to come to terms with it. Just a few short weeks before the passing of my father. In a manner of speaking, I will never get over the deaths of my parents. They both loved me, I know that. Their anger and disappointment with me was not with who I am, but rather with the fact that I didn’t share a lot of the values that they had. Nor was I going to capitulate to their demands and change who I am. Neither of them knew I was a Pagan. Both merely assumed I was a lapsed Catholic, I guess. Religion was a topic my father would never touch, and one where I completely tuned my mother out.

March 1, 1941, in Wiesbaden, Germany which was on war-footing for the second World War, my mother Barbara crossed over the veil and into this world. Her life’s journey would bring her from Germany to the United States, Japan, and back to Europe. While our interactions were never the smoothest, kindest, or most loving; we loved one another as a mother and her child could only do so. This morning, I stepped out onto the street near the hotel here in San Antonio, and found a group of trees. I stood under the trees and spoke the Druid’s Prayer for Peace, remembering all the times that I could that took place  between my mother and myself.

I am most assuredly not the son that my mother and father wanted me to be. I didn’t become the doctor that they envisioned me being. I’m not sure she ever realized that I am not an intuitive healer. I didn’t follow in their footsteps in my career or life Paths. I wasn’t career military, like my father. I always wished; however, that they would have acknowledged that I had managed to do things my own way, and have been successful at that. I think they really did understand that, and just could not get past their disappointment that the little tow-haired boy that they raised would choose to do something completely different.

Regardless of all that, happy birthday mom. I do miss you.