One of the nice things about taking time off from everything else in life, is that I get the chance to look backwards a bit. In this case, I was digging through some old notes in my Evernote application. I ran across some things I wrote during the “Morphing the Myth” segment from this year’s Pantheacon – which was an absolute blast. As I read through the notes, I realized that each point could be written in up as a set of posts for the blog, and I have been working on that since that point. Later this coming week, I will start publishing those here on the blog. However, I thought it would be prudent to preface those posts with this one.

One of the first things I should do here is to introduce what the panel was about. According to the Pantheacon booklet I received during my registration:

Mythology is an integral part of our belief systems. Over the years, however, these ancient tales have been transformed and added to in order to make them more palatable to modern audiences. Many Pagans of today had their first experiences with Paganism in their reading of ‘The Mists of Avalon’ or watching the British ‘Robin of Sherwood’. How has the modern interpretation of mythology changed the Pagan community, and is it a change for the good?

When I was putting together my schedule for Pantheacon, this was one of the “must attend” panels I had starred. There were only five of those total. “”Finding Your Personal Magic” (Shauna Knight), “The Dark Side of Druidry” (John Beckett), “The Cauldron of Change” (Kristoffer Hughes), and “Bardic Magic” (John Beckett). The last was held in the ADF Hospitality Suite, and I would hear it again later at the Gulf Coast Gathering (2016) in a slightly revised format. The other panels were all presented by people whom I have met (briefly in some cases), but “Morphing the Myth” was on a topic that has drawn me in quite a lot over the years. Mythology. And it went further down the trail…into the realm of how new stories create new mythologies, and how retelling of the stories can change with the moods and tastes of the popular culture of the time. In other words, morphing the story to fit the understanding of the new cultures that have grown up.

Yes, the panel intrigued me quite a bit. In fact, I might even say that it was the highlight of the entire Pantheacon for me – at least from an intellectual side. And that’s not taking away from the cerebral aspects of any of the other panels I attended. Hardly. Just merely stating that this one panel piqued my curiosity in a manner that I could not explain, heading into Pantheacon.

Once I arrived at the panel, I found quite a few folks had already arrived. I was four deep in what appeared to be a crowd of about thirty-five. For an early morning panel, I assumed that this was a healthy number of attendees. As the panel continued, more folks filtered in. With S.P. Hendrick were two other individuals – an Australian man (judging from the accent) whose name I never caught, and a lady whose face seemed familiar. She turned out to be the author Diana Paxson, whose books I have adored for quite some time. As my notes show, the conversation moved along some very familiar territories, which I will explore through the next series of posts. And the conversations were absolutely fascinating. In one of my writings after Pantheacon, I noted this as well as how the panel has had me looking through various stories that have been favorites in my life. 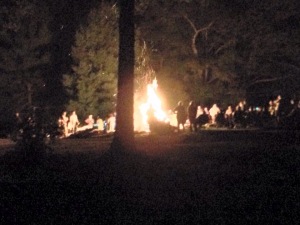 And while I have alluded to where I am headed with this next series of posts…I am about to dive a little deeper than before. What I am wanting to do, is to dig a little deeper into the ways that mythology, stories, songs, poems and other aspects of the Bardic Arts fuel the fire of who and what I am. Hopefully, some of what I am about to present over the next few posts provides a way for you to look deeper into your own personal Spiritual fires. And perhaps, some of the questions I walked away from this panel with will also help you look a little deeper into how mythology presents itself to your life, your Spirituality, your connection to the Gods and Goddess, and your connection to the world around you. I know its done just that for me.

2 thoughts on “Morphing the Myth – a Personal Look”