Re-balancing my Life, and placing my Gods first on my Path is a part of being the Druid I am.

I have slacked off on my morning rituals for a few months. Its been rough to get back into the swing of things, especially with moving up here near the Oklahoma/Texas border. It didn’t help that my cast-iron crows were missing after the move. But they have been found, and placed back into their locations in the stone circle with Kokopelli. 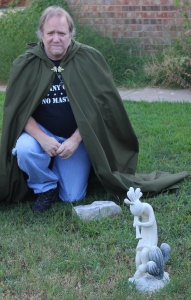 About two weeks back, I decided to spend some time out at the stone circle one night, and do a re-dedication of my Spiritual Path. The idea was to bring the stone circle back into focus within my Daily Path, as well as re-sharpen my focus on some of the things that matter to me in my Spiritual Life. I also had the “dreamy” idea of doing a video of the entire ritual and placing it online as a start to doing short, infrequent video clips on YouTube. Well, I found out that I am horrible at making video work…so that’s still a work in progress. But I did manage to make it through my entire ritual.

Interestingly enough, I had this semi-scripted out. Most of my rituals are very informal, very impromptu. When you are the sole member of your ritual gathering, impromptu works very well. But for this little ritual, I needed a bit more structure.

The idea was to stick to basic concepts, and allow my method to be impromptu. The initial start was to greet the Directions, and then in the center I greeted Fliodhas, the Irish Goddess of the forests. To the North, I greeted my ever-present companion Crow, and to the West I greeted Coyote. In the East, I greeted my Spirits of Ancestor, and to the south I greeted the Spirits of Place. Once I made my way through this initial set, I finished the start of my ceremony by utilizing the call for Peace to each Direction.

Then started my moment for dedication – placing myself into the hands and guidance of Fliodhas. I brought several small cups of bird seed, and two glass bottles of tap-water into the circle. For the dedication to Fliodhas, I stated that I was Hers to guide, and that I would be Her instrument whenever she felt it necessary. I further promised to bring another offering and repeat my dedication to her when I travel to Ireland this coming winter. I then re-dedicated myself in a similar manner to Crow, and I left two offerings of the bird seed in the center of the circle, as well as pouring a healthy dose of water for both of Them.

Then I sat, and meditated on the stones that I have in this circle. None of these stones come from here in Texas. A few come from the Ouachita National Forest in Arkansas, some from the Rocky mountains near Colorado Springs, one from the area near Mesa Verda, one from near Medicine Wheel in Wyoming, and a few from Glacier National Park. Each of those areas resonate deeply within me, and thus the reason I have some stones from there. For me, these stones are sacred. For me, the area between them resonates as sacred space. I remembered how each of these stones came to me, and why each of them are special to me.

When I finished with the meditation, I thanked the Gods and Goddess who had joined me. I thanked the Spirits of Ancestor, Place, and Direction for their attention and time, and once again pronounced my desire for peace to each of the directions, along with a final desire for peace throughout the whole world. Then I gathered a few of the cups of birdseed and began leaving small piles of seed just to the outside of each stone, until I had no more birdseed available. Then I opened the second bottle of water, and wet each of the stones in the circle, remembering again how each came to me. When I was finished, I gathered up the cups and the bottles and went into the house to clean up.

Each morning since, I have walked outside before I have had my breakfast and poured a small offering of water, along with a handful of birdseed which I scatter just to the east of the circle in the grass. Each evening since, I have visited the circle again, and performed a grounding/centering exercise. Whenever possible, I have tried to be barefoot when I have done this. All of this has been meant to re-focus myself back on to being who I am, and allowing some of the stress of my workday to be left behind.

I am not sure “appropriate” this may seem to another polytheist, or another Pagan, or another Druid. It works for me. And honestly, that’s what matters most.