Usually, for the blog, I think of a topic that piques my interest and write. Sometimes, its a response to another blogger’s post. And every once in a while I get a question from someone wanting me to write on something. That’s the case for this particular post. One of the folks over at the podcast’s page on Facebook commented that it would be interesting if I blogged about about how I came to where I am on my own Spiritual Path. I have talked about little pieces of this throughout the blog. But never all of it at once. So, let’s give it a whirl. Warning:  this is going to be in a couple of pieces…. 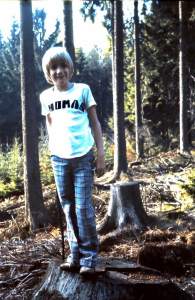 While my true walk into a Pagan Path starts somewhere around 1987, the true beginnings are much further back than that. Back in my pre-teen years. I was raised in a military (US Air Force) family, and moving from location to location was the theme of the week for me. I was born in Tokyo, Japan, moved to Washington DC; Del Rio, Texas; and Weisbaden, West Germany in the span of a handful of years. From the age of six, I started doing volksmarching with my parents on the weekends, which usually had us walking 10 kilometers in the German fields and forests. At the end of the walking, I got a nice little medal (which I still have a huge pile of these), and my parents would stop at one of the local vendors to get soft drinks for my mother, my sister and I while my father enjoyed a local brew. Walking in the forests and open fields provided me with the love of being in the forests and fields that I have today. Looking backwards, this is really the start of where my personal Spiritual Path begins.

But that’s the reverence of Nature part. My first taste of the Gods comes in nearly the same time frame. As I have posted before, it was through a set of Encyclopedias. The Greek and Roman Gods and Goddesses were presented to me in this way. And this also helped fuel a love affair I have had in World History with the Roman Empire. It was nearly a decade later, that Gary Gygax and TSR helped me see the wider world of polytheism, through the

eyes of Dungeons and Dragons. Yeah.  AD&D helped to open my eyes with the interesting and (for a teenager with little desire to read) expansive tome “Deities and Demi-Gods”. Once again, Roman and Greek Gods and Goddesses were presented, but so were Norse, Celtic, Sumerian, Japanese, Chinese, and many others. It literally allowed me to see a world filled with Gods and Goddesses that were individual entities. Of course, none of that filtered into my mind as real, tangible entities. After all, Dungeons and Dragons was just a game where you used your imagination. There definitely was more to come.

All during this time, I was being brought up in Catholic schools. Not because my family was Catholic, both of my parents were Protestants who didn’t go to church. I was sent to Catholic schools to get “a better education than I could in public schools,” which I certainly did. I finished next to last in my class in overall GPA. But my collegiate test scores showed that I was capable of far more than I ever managed in class. In my senior year of high school, I decided to move on from the Catholic faith system, I never participated in the mass other than to stand, sit and kneel at the appointed times. I never took communion, nor did I ever sit in a confessional (I think Father Reising would have had a heart attack if I confessed all the “sins” I had committed by the time I was seventeen). I moved along to the southern Baptist faith, which seemed to have prettier ladies and a co-ed softball team I could play on (my interests were hardly along the Spiritual lines at this point in my life).

My experiences within the southern Baptist soured me completely on religion as a whole. All I heard about was how I was a disappointment in the eyes of God. How I needed to hit my knees and beg forgiveness every single day of my life, in the hopes of having begged hard enough that God would let me into “Paradise” when everything was done. I constantly heard from adults that my long hair was “not acceptable” – a comment that was always made out of the earshot of others. Honestly, if I wanted to hear comments like that, I only needed to go home and listen to my conservative father’s comments after he had a beer or two.

It doesn’t take me long to move on from this, and I spend a few years not even thinking about my religious beliefs. I join the military, and leave the “religion” area of my dog tags blank. While in the military, I begin dating a Wiccan. She was a few years older than me, but we attempted to make a go of things. One of the first things that was brought up was her beliefs. She handed me three books to read before we even started our overall conversation: Margot Adler’s “Drawing Down the Moon”, Starhawk’s “The Spiral Dance”, and Raymond Buckland’s “Witchcraft From the Inside”. Of the three books, I really get into Adler’s. I wind up purchasing a copy of this from a local Pagan book shop for myself, and read through it another four times. The year?  Yep, we’ve reached that 1987 point that I mentioned before. Where things go from here….is part of the next post.

One thought on “Remembering My Journey – Part 1 – Pre-Pagan Beginnings”