Apocalypse. Doom, destruction. I hear and read it from all sorts of quarters. The few Tea Whacko friends I have make all kinds of wild claims about how President Obama is out to destroy the United States from 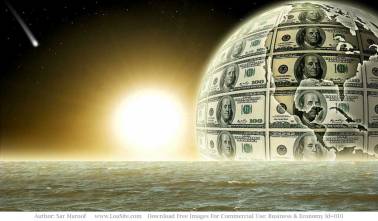 within, while the radical Muslims work to destroy it from the outside. Many of my Pagan friends point out how the destruction of parts of the environment are the harbingers of post-natural worlds, such as Trantor as mentioned in Isaac Asimov’s “Foundation” series or even Coruscant from the Star Wars stories. Then there are the political and news junkies that point to all kinds of issues and violent clashes that clutter our media airwaves and cyber-waves as examples of mankind not being responsible to the environment or his fellow human beings. And for the most part, I’ve poo-poo’d these thoughts nearly every single time I have read or heard them.

Being claimed by two Trickster Gods (Coyote and Crow) means that I sometimes get popped in the back of the head in a joking manner for things of a strong and serious nature. These visions and cries of CHicken Little-esque destruction are no different. My nature has been to laugh off all these issues as people playing to the extreme of a topic – sometimes seriously, and other times just to get a “rise” out of a particular individual or group of people. With most of my communication being done via the Internet, its very easy to see where people get into yanking other people’s chains, just for the sole purpose of pissing people off. Its an internet Bloodsport, in my opinion…and a slight tangent from the topic. But you get the general picture of why I have the tendency to slough off statements as wild cries of doom and destruction. But this past week provided me with a moment to reflect on how that has provided me the ability to slip past some really important issues.

This past week, I set my class on the task of convicting or setting free former NSA contractor Edward Snowden. I am not going to get into the details of that, since that’s a huge step away from the topic. It was a moment that took place while the class emptied out into the hallway. One of my quieter students approached me, and asked if I had seen a movie called “Switch“ which is an examination of energy usage currently around the world, and how viable alternative energy options are from a realistic perspective. I admitted that I had not, and our conversation ended there. But that did not stop my thought process on the subject. When I got back to the house, I found the website associated with the movie and started reading and watching. When I was done, I ordered a copy of the DVD – and even if I cannot play this in the classroom, I can show it to other people.

Crow is such a persuasive personality. The whole time I am watching this video, the back of my mind keeps pounding at me.

A Pagan would want to know even more.

An individual on a Path of Druidry would want to know how this can help keep our natural world together.

Look, there’s a relationship between the Natural World and your world. Without that relationship in a healthy condition, there’s a strong chance for the suffering of the entire world – mankind, animal-kind, and plant-kind.

There are times I sit back and groan when the Gods start poking at my head this way. But its actually a very large, and very problematic issue. Our usage of power, particularly here in what’s called the “Western” world, is extremely heavy. In fact, our consumption is extremely heavy when compared to other parts of the world. Our government has a focus of trying to find “better, cleaner, more efficient, more readily available” sources for power. Sometimes, our government is even willing to decimate the environment in another area of the world, just to achieve that end. Its not a huge stretch to the imagination to see that the country being ravaged might take an exception, particularly if the process effected their own level of living. Its not a huge step to realize that the usage of force to achieve those power needs would be out of bounds – particularly for countries with large standing armies, such as the United States or China.

Before we start stepping into Alex Jones territory here – let’s be clear. What I am suggesting is currently not a foreseeable event – at least for me. But I can see how such events could occur quite easily and quickly. I can also see how the larger world powers could vie for those resources through military force. However, I can also see alternative energies paving the way for changes in resource needs, provided such alternatives are taken seriously.

Currently, I have a neighbor that is building a muscle-truck – essentially, its a rat-rod that he likes to rev up from time to time to let everyone for a half-mile radius know that he owns. When he takes it out of the garage to test any changes he’s made, its apparent that the gas pedal only has one use – to push it through the floor-boards. The V8 Hemi engine he has under the hood makes a lot of racket when he does that – but I bet it also drinks a substantial amount of gas. If I suggested he consider moving to an alternative fuel such as ethanol, he would most likely laugh and tell me how the ethanol lacks the “performance” that normal fossil fuels combined with nitrous oxide provides him when out on the road. This is a typical statement that I have heard in relation to moving away from fossil fuels to cleaner and easier to obtain resources. I have been considered, for the last two years, putting solar panels on the roof of my house. I would be the second house in my neighborhood to do so. The individual who currently has them, is the frequent butt of jokes among my neighbors. His chosen method of using an alternative power source is considered to be “hippy stuff”. In other words, a switch to any alternative source is considered to be the folly of “hippies” and “geeks” who do not know any better. Alternative power is not consider to be a viable option, but rather just a drain on government resources that could be put to better use by limiting food stamp programs for the needy or halting same-sex marriages in the various states.

So there’s plenty of steps that need to be taken before alternative energy sources become a reality – and that’s IF they are a viable reality. And this is only scratching the surface. There are plenty of other options and issues that come into play as well. Enough to make an individual dizzy and confused as to what’s more important and where to start.

Whenever I hand my students a paper or a case study to work – I implore them to start in the most obvious place: read the case study completely through. Take notes on what you read. Then read the questions that you need to answer in the assignment, and try to match those up with any of the notes that you took. Then read the case study again, and see if any of the unanswered questions are answered there. Then, do your research. Look into all possible sources, find all sorts of perspectives, and be sure to include the perspectives that are counter to your own opinion. Find how these integrate with the questions you must answer, and the answers you have already found. Then write the paper. The paper is the solution, but for the solution to work – you must have everything you can possible get in front of you.

The alternative energy situation plays the same route for me. As someone on a Path of Druidry, I realize that the best solution will be one that benefits my environment and allows me to integrate with my world – not force my world to integrate to me. This is where I believe mankind has fallen off to the side. Instead of working WITH our environment, we have worked to dominate our environment and force it to BEND TO OUR WILL. As John Beckett notes in his blog post “Responding to a Dysfunctional Society” that can be due to a number of factors, none of which I am headed into at the moment. I know that there is still a lot of material that I need to gather in, assimilate into my thinking and then parse into a form of understanding and a course of individual action. I know I am just one person, and there’s not a lot a single person can do. But one person can INSPIRE others, and that’s what I hope to do. Even if its just a single person. Because my hope is that that individual will INSPIRE others to inform themselves and take action as well. It may seem an insipid and foolish thing to do…but I do know that our current energy sources are either finite or too costly to our environment to be sustainable in the long-term. And I am not about cleaning up this Planet for myself…I want to clean it up and make it viable for my great-great grandchildren and beyond. I want them to know what trees look like, be able to experience the wonder and mystery of the forests, the plains, the mountains, the beaches…without wondering what it REALLY looked like without the metallic and plastic presence of mankind.

One thought on “Becoming a Defiant Pebble…”

What I am Reading