In my previous post, “Becoming a Defiant Pebble“, I was discussing a point one of my students had brought up with me after class this past week. This point turned into a nice discussion between the two of us, and I wanted to move over to a secondary point he made.

Now, before I get started down the Path of this point too far – let me be clear, I am not into trying to predict the future. I also do not envision the United States becoming an oppressive police state, where those voicing opposition are rounded up and placed in detention camps in the desert southwest. Yes, there are people, such as radio personality Alex Jones, that advocate this future, and even go to great pains to tie the current Presidential administration – the Obama Administration – to being the start of that process. I can see where people draw that conclusion, however, I am not one of them. I am not writing this to score political points anywhere, nor am I trying to establish some form of political cred here. If you think that this post is about politics, then you have misread my entire intent.

Human beings are an interesting lot of creatures. We have the ability to think for ourselves. We have the capability to take rash courses of action, even when logic shows that a better course is readily available. We can rationalize our intentions and ideas, even when shown how wrong our “gut feeling” really was. We agree on things. We disagree on things. After an argument, we can either shake hands or come out swinging. And we relish our violence.

The point is not to moralize. Its not to rail against the Second Amendment here in the United States. Nor is it about trying to achieve some point for/against gun rights. The point here is that no matter how much we try to seek peace, war is always right around the corner.

We covet what we do not have. We will even achieve the means to get it through agreement, coercion, and even threats. When that does not work, we will either walk away still wishing we had whatever it was, or we will take it by force and violence. This was the point that my student made to me.

In the documentary “Switched“, there is a large point made about the distribution of fossil fuels. Our entire world society is built around it. The industrialization of our world economy is maintained and driven through its use. And it is a finite source of energy. As that pool of energy grows smaller and smaller, countries that do not possess it natively will go to greater lengths to obtain it. None of this, to my knowledge, is in the documentary. It is, however, a reasonable conclusion. This was the culmination of my student’s point. I had a counterpoint.

I agree that there will be small-scale wars based on the possession of fossil fuels. However, I believe that the larger scale wars will happen over water sources, particularly clean sources for human consumption. Alternative fuel sources will eventually be discovered, utilized, and refined to achieve the needs that society has for industrialization. There is a fairly significant chance that the industrialized parts of society may become less and less, resulting in a decrease of the reliance on a global marketplace and a greater reliance on the regional marketplace. But water remains the one resource that humans need to survive.

Currently, we achieve our dependence on fossil fuels through recovery methods such as fracking and tar-sands processing. The tar-sands process has been documented as an environmentally unsound practice. There is evidence that fracking also does environmental damage in its usage as well. The biggest concern is the poisoning of the water table beneath the earth. Once the water table is polluted, the area becomes unusable for human needs. This means that people cannot live there, nor can the cattle, nor can crops be grown there. And if people do chose to live there, water must be imported, for usage and consumption, from other areas. In the quest for fossil fuels, we choose to use these methodologies and essentially poison our environment.

When There’s Nowhere Else to Move

Eventually, countries will lower the size of sustainable lands for their own internal usage. Suddenly the land just over the hills in [Y] country starts to look really inviting. See, the above paragraph about how humans deal with wanting something they do not have. Maybe its not the land, but rather the clean water table that is desired. Perhaps, country [Y] is placing high values on that clean water and are charging at the highest possible prices for country [X]. After all, that’s just the simple economic principle of supply and demand. Pure capitalism in motion. When country [Y] runs out of money or tradeable commodities, what happens next? Its a fairly easy scenario to understand – when desperation for survival sets in – anything goes.

I really do believe that water will be a far bigger issue than fossil fuels. I do understand that desalination processes are helpful in staving off the fresh-water issue. After all, the oceans are pretty big. But we pollute those as well. We dump our trash into the seas. In the 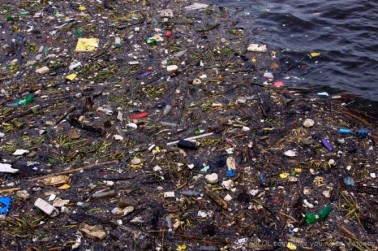 Pacific Ocean, there is a giant floating mass of trash known as the Pacific Trash Vortex. Many of its primary components are fossil fuel by-products, such as plastics and rubber. Here’s a non-drinkable water source that we are polluting before we even utilize it for a solution for clean, consumable water.

There have been a few folks – and I mean just a few – who understand that polluting the water tables and the oceans is a very bad thing to do. Essentially – and forgive the language – human beings are the only species that take a shit in its own food before eating. But all of that aside, as a Pagan, I am appalled at the manner in which our environment is treated as something to conquer, use and abuse. Seemingly, human beings have no desire to integrate into their environment, rather they wish to make the environment bend to their collective Will. They wish to dominate and conquer it, as if it were a competitor. When we remove some component from the balance that our environment has set up – such as hunting wolves and coyotes to near extinction – we disrupt that balance and create other problems from it. The wolves and coyotes are the natural predators of their environment, and keep the population of other animals in check. When the balance is disrupted, the other animals – most being herbivores – eat more of the plant life in the area, which in turn removes some of the protections against erosion. When the erosion occurs, the plant life does not grow, the animals move to another area where the food supply is plentiful – increasing the population in that area to levels that are unsustainable and the process continues. All because a bunch of farmers were pissed off that the wolves and coyotes were killing a few chickens and livestock and decided that the vast environment was not big enough for them and these predators.

I can even see where some of this is based off of religious concepts. Christianity holds that man must have dominion over all. Essentially, that Nature is here to serve mankind. Therefore, the use and abuse of the natural resources is a mandate from their belief system. Yes, I am being a bit extreme on this point. I will yield on the point that not all Christians see their scripture in this manner, but there are quite a few that do. Its those people that I tend to fear. My beliefs hold that I am only a small part of my environment. I have the capability and capacity to be a greater caretaker for the environment than my four-footed and feathered brothers and sisters do. While I cannot change the pollution and garbage that litter the entire world landscape, I can do my best to do so in my own area. While I cannot make laws to stop

fracking and tar-sands oil production methods, I can petition my own governmental representatives (city, county, state, national) to stop such activity. I can also join in protest movements, such as Idle No More, to attempt to stop efforts in my local area. This includes using radical activities such as standing in front of construction equipment and facing down law enforcement members over such issues. I can also petition my Gods and Goddesses in ritual for assistance in getting key individuals to understand the irreparable damage we are doing to our own environment.

I am not, however, asking anyone to go outside of their comfort zone. It is understandable that some people cannot or will not go to the radical lengths that some people have within movements such as Idle No More. Standing in front of construction equipment implies that you are willing to be seriously hurt over the issue, or perhaps even killed. Standing up to law enforcement means that you may be physically injured, pepper-sprayed, tasered, and even jailed for your efforts. Some people cannot afford for any of that to happen, as it would jeopardize their ability to provide for their own families. That is completely understandable, and honorable. You can still make your voice heard – through Emails and letters to your governmental representatives, and by voting in elections for individuals that WILL stand up for our environment.

Make no mistake, the clouds of war are on the horizon. I have denied that repeatable in the past – and its impossible to deny any more. But if we act now, in a positive manner, and a responsible way – we can try and change the manner of the war from one of violence to one of words and politics. If we are looking for a place to start – pickup trash in your local area. Its not a huge thing, but its a START. Then we can focus on stronger, bigger issues – such as keeping our water table clean. And once that fight is under control, we can look to other issues, such as removing our impossible reliance on fossil fuels. One step at a time, one issue at a time. We will not and cannot solve these issues all at one time. We must take small steps first – issues that we can get around and create solutions for NOW. Then, with that momentum, we can solve the bigger problems. Or, we can sit back and wait…