Fourteen Years Along – Digging No Deeper Than the Surface

So, I wrote this post yesterday – but held back in publishing it until today. My points are no less valid today, than they were yesterday. However, I felt that publishing this one the day of remembrance for the attacks would have been in poor taste. After all, we were remembering the people who had died in the attacks — and hopefully all the people who died in the aftermath as well. Anyways, here’s the post I wrote for yesterday….

Well, the calendar has turned to one of the most infamous days in history. The eleventh of September. Fourteen years ago – individuals with a twisted mindset of what their professed faith said about people not like them, set out to visit unspeakable horror on these “different people”. We’ve all seen the images, many of us remember where we were when we first heard. Some of us even remember the rapid grab of power by our own government – all in the name of protection.

Many, many people that I have met believe that I look at members of the Muslin faith as “evil” – after all, I served in the Air Force during conflict with a middle eastern country. But they would be dead wrong. The Muslim faith is fairly well documented as to the manner its adherents should believe. But that’s not my argument at all. Rather, I do not judge an entire belief system and its adherents on the actions of nineteen individuals who were bent on savagely terrorizing others, in the hopes of achieving…whatever they were wanting to do. I can make some assumptions on those aims, but to be honest – it would only be wild assumptions based on *my* understanding of the world around me. Not a fair comparison whatsoever.

These individuals that carried out these acts of terrorism are not the typical adherents of the Muslim faith. They are not even the mainstream aspects of that faith. Try telling that to the average Christian American though. A belief system that calls for one another to “love our neighbors”, to “hate the sin, but love the sinner” — how interestingly odd that there’s this point of not applying this to members of the Muslim faith, simply because of the actions of nineteen men. But let’s not point the finger solely at the Christians – after all, American is not a Christian nation. We are made of many different faiths, many different backgrounds. And furthermore, finger pointing is not what this is about either….

Let’s peel away some of the layers to this though. Its not an American versus Muslim thing — its a basic “Us versus Them” thing. They look different from the majority of Americans. They believe differently than most Americans. That difference means that they should go back to wherever they came from, right? That would be the house at the end of the block. They live here too. In fact, they are a part of us – unless you go to redefine what “us” really means.

For my own perspective, I don’t really see things in manners of skin color, hair color, eye color, height, weight, sexual preference, religious faith, economic level, or whatever measure you may dream up. In the words of Depeche Mode – “people are people.”

Seriously, we have managed to reach a point in society where the labels placed on people mean more than the people themselves. Label me?  Sure, go right ahead. I’m a Pagan, a Bardic Grade student, an Animist, a Polytheist, a straight male, a white male, Germanic, a statistician, a data analyst, a student, a teacher, a friend, a Libertarian, apolitical, blue-eyed. So what does all that really mean. Nothing. Put together, it makes up who I am or at least a part of it. But if you only look at the labels, you only get the smallest part of who I am. You miss so much more by only glancing at the surface.

On this day, fourteen years ago, an unspeakable tragedy occurred. Many people lost their lives. Many more would lose their lives as the United States government lashed out against the people of Afghanistan and Iraq through military force. Many others, here in the United States were verbally and physically abused – some even killed in cold blood — simply because people would not look past the label. We light candles for a few more than 3,000 individuals who died during the attacks. The aftermath shows that countless more paid a similar price – just because of who they were, where they lived, and what faith they believed. All because nineteen individuals followed a twisted version of their own faith. And because we couldn’t look past the surface…

May all of these people have found solace in whatever belief they had of the afterlife. May they have found peace in such unspeakable violence… 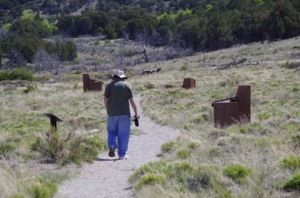