There’s a storm brewing….are you ready? I’m getting there…a few of my thoughts.

Over the past several months, many of the bloggers I read have talked about the darkening storm clouds. Those Pagans that I know converse with the Gods and Goddesses have heard the same thing – there’s a storm gathering. It only takes a few minutes of reading the headlines in the news to understand that as well. I hear the whispers from among my Dream Crows.

When I attended Pantheacon this year, you could feel the perspective that “change” was in the air. It was an undertone throughout the entire gathering. Not spoken often, but felt. And the meanings behind it could be construed in many ways.

For me, there’s a strong perspective of change going on in my Spiritual life right now. My feet are being hardened to the Path that I am on. There’s a strong push towards my needing to move along in my studies. There’s changes happening within my Mundane life as well. My skill sets are being pushed to the limits, training is being provided to expand my knowledge and abilities. What is being asked of me is literally pushing beyond what my job description denotes. But there’s always the tone of the coming storm.

I felt this type of palpable energy at one other time – the late 1980s. It was time of the Satanic Panic. Anything not Christian or some other mainstream belief was denounced as “devil worship.” I watched friends battle with the state government to not lose control of their children – all simply because they were of a faith that was not mainstream. Accusations were leveled against some of my friends that they practiced animal (and sometimes human was hinted at) sacrifice. That children were made to participate in these rites, so that their souls could be delivered to Satan. Lying idiots seeking publicity and fame, such as Mike Warnke and Lauren Stratford, wrote books and provided public testimony of an underground Satanic society that lived within the suburbs of the United States. Those lies and accusations leveled against Pagans wound up having families torn apart by State agencies.

During the Satanic Panic of the late 1980s, I was openly Pagan. But I was in a somewhat protected environment – the United States military. I still suffered through threats and taunts – and the occasional physical confrontation. But a lot of that was nothing compared to what happened to my friends in the civilian world. It literally was a war, between the Christians and any non-mainstream adherents. I remember very well how everything looked and felt during that time. And I see much the same starting to happen again.

But there’s a difference this time. We, the Pagan community as a whole, have worked very hard to reconnect with the Gods and Goddesses in a greater fashion. We have also learned that together, we can be a force for change. We continue to attempt to reach across the stream to Christians and other faiths – to show that we are no different than they are. We have made great strides towards interfaith relations. The problem is that most of the interfaith relationships we have cultivated have been quiet, calm currents. Within the Christian community, there are plenty of other voices that advocate punishment for those that do not follow their twisted examples of Christianity. At times, I wonder if I will start hearing the shouts for “baptism and a new shirt or death!” But then, we are only talking of one faith that is at issue here. There’s also those that twist the teachings of their Muslim faith for political and social control and power.

Let’s be a little realistic here. The Muslims that are forcing their beliefs on others through violence, bloodshed, and such – they are not in this for their faith. Those that do feel that way, have essentially been brainwashed into that manner of thinking. The true aspect behind it is social and political control of regions of the world. Its not about religion, faith or following the underlying philosophies of their beliefs. They want to be the ones holding the reigns. The same holds true for the extreme aspects of Christianity. Its not about following the teachings of Jesus ben Joseph. Its about twisting scriptures in a manner to justify what is most certainly un-Christ-like actions. Its about controlling others.

Make no mistake about it folks, the storm clouds are gathering. Our skies are darkening. And we must prepare ourselves for the possibilities of defending ourselves against fanatical perspectives. That means voting. That means looking long and hard at the candidates and their parties, and what they really believe. That also means being ready for the worst things that might be part of this. Defending yourself against physical attacks. 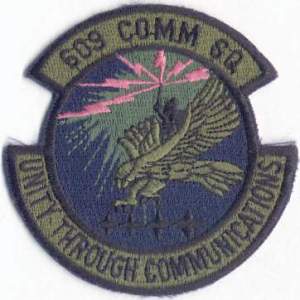 My squadron patch from the United States Air Force.

The latin phrase that is the title of this blog post translates loosely to: “if you want peace, prepare for war.” I am a peace-loving hippy-type. I don’t like to argue with people over stuff. I certainly don’t like to get physical with other people. I have a walking staff. As I have pointed out previously on this blog, that staff is for walking, but it can certainly be repurposed to defending myself and those that I love. I know where my nearest family is…my extended family. My blood family, for the most part, would not defend me over something like this. I’m very well aware of that, so I know those safety nets are not available. But I do know where my extended family are at. And I know I would be welcome there if it was necessary. Just as anyone of them would be welcome here in my home, at any time.

I see the clouds gathering. I see the storm front approaching. I know its not going to be an easy time. And I am preparing every day for that inevitable moment when it starts. Perhaps it won’t be nearly as bad as I think. If so, then I am thankful that it wasn’t as bad as I thought. But I am prepared. I remember the Satanic Panic of the late 1980s. I remember how things felt, that palpable energy that was in the air. How my friends suffered. How we weren’t really ready for some of what happened. How many went underground when it all went down. I’m not going underground. I’m ready to defend my family, my tribe, and my beliefs.