With the Presidential nominating process for the Big Two finally winding down – you would figure that everything would be ramping down as well.  Not really.  Judging by the rhetoric and anger and posturing that takes place in social media, you would think that the entire election process would be far closer to November then where it actually is. Essentially, its down to three candidates:  Trump, Clinton and Sanders. None of which I will likely cast a vote for. Why?  Because I don’t really care for any of the three. But in today’s social media climate…you can’t just make a statement like that and leave it alone. No, instead, you have to defend why you aren’t for this candidate or that. Sheesh.

But that’s where things really have seem to have gotten to. Everyone seems to be looking for a debate or an argument…even when the statement that is going to be in contention is a non-committal and neutral one. Everything’s about arguing and debating to be “right”…there’s seemingly no room for discussion. The true reality is that most of the social stratosphere in the internet is not about socialization, its seemingly about how correct you can make yourself out to be.

As I watch people move more and more to one side or the other throughout the Presidential nomination process, I have started to notice how few the numbers are here in the middle. Once again, there that feeling of being in no-man’s land during World War I trench warfare. And to be honest, neither side in the trenches seems like a place where I would want to be. Thus, there’s a growing feeling of strapping on my helmet, getting as low to the ground as I can, and weathering the coming battle.

But is it really that much of a battle? My mind goes back to when Bush v. Gore was underway, and there was anger of a similar nature then. It took a few weeks, but eventually it all blew over, and everyone settled back into their daily lives and routines. That’s known as the short-term memory of the American voter. But it starts to bring up other thoughts for me as well.

People get hot and bothered about change. Whether that be in politics, or in their own mundane lives. They stamp their feet, stand around debating the points that they feel are relevant, and raise their voices when they feel that they are not being provided the proper amount of attention or respect for what they have to say. And once the dust settles; everyone starts to head back to their routines. The parts of their lives that they have agreed to handle, are comfortable dealing, and are not as bothered over. And the desire for change begins to recede into the past, melting away as quickly as ice cream on a hot summer day. Perhaps, that’s why change is not really taken seriously by so many. Because its essentially lip service to the moment.

Now, having started this point by dredging up the political backdrop, I am going to ask you to forget all about that stuff. In other words, I am about to change the scenery in the background. All I ask, is that you set the politics aside and keep up with the backdrop’s change (there’s that fscking word again!).

Change is important in our lives. Without change, we don’t grow. We stagnate, become rigid, and eventually we will break rather than bend. I turned 50 last year (those of you over 50, shut up with the smart remarks) – an age I never thought I would be alive to see. Seriously. My twenty-something mind could never comprehend that. But as I have grown older, I have noticed an odd trend in my life….I am far more pliable now then I was in my youth. I am more accepting of change; more willing to allow change to happen before reacting to it; more understanding of the reasoning behind the change; more conscious of all the choices that change can provide. I always thought it would be the complete opposite. That I would get older, become less accepting of change, more settled into routine…and I have no explanation of why things are set up this way.

To be honest, I am not sure I care why things are this way, either. So I handle change a lot better than most people I know. Big deal, right? Well, at least that’s the sentiment that I tie to it. Life is going to happen all around me. There’s not much I can do to alter things…so I should be cognizant of what takes place and figure out how I need to adapt to it. For me, life isn’t about making changes – life is about adapting to changes. And I can’t say for sure where I picked up that concept in my beliefs.

Perhaps it came from my studies within OBOD, perhaps my studies within Zen Buddhism, perhaps a combination of those…perhaps something altogether different. All I know is that life is a lot like improvisational jazz. There’s an underlying rhythm to the music that has to be honored, but across that current – you can bring whatever notes you feel are necessary. Or as a blues musician that I used to hang out with was fond of saying: “You don’t play the music, the music plays through you. You’re just the conduit from which it flows. Don’t fight it. Play it.”

So let’s set the politics backdrop back into place. Its May. The election takes place in November. That’s six months down the road. A lot is going to happen between then and now. And if you think that politics is at a fever pitch now, you’ve honestly not seen anything yet. Down here in no-man’s land – among those that look to the third-parties, or those that have not made up their minds yet – perhaps we need to dig our own trench here in the middle of the battlefield. And then hunker down for the long haul. I’m not much of a guitar player, but I am going to sit down in the trench here and play. Play whatever comes to my fingers, and see what happens.

Oh…and who will I vote for? I honestly have no idea at this point. Currently, I see three candidates for the Big Two…and I won’t vote for any of them. There’s still time for newer candidates to come forward, and I am sure I can find someone among them that I would want to cast my vote for. And with that vote, I will essentially be saying that I want that person to stand in my place as a representative for my values. And I will likely be criticized by some quarter of society over my choice. So be it…I just hope that wherever that criticism comes from, that they won’t feel compelled to get further into my face, when I smile and provide no other response to their statements.

Good jazz, centering and balancing….yeah, man. Good, centered calm. Watching for the changes….on my back porch with my guitar, some birdseed, and my stone circle. 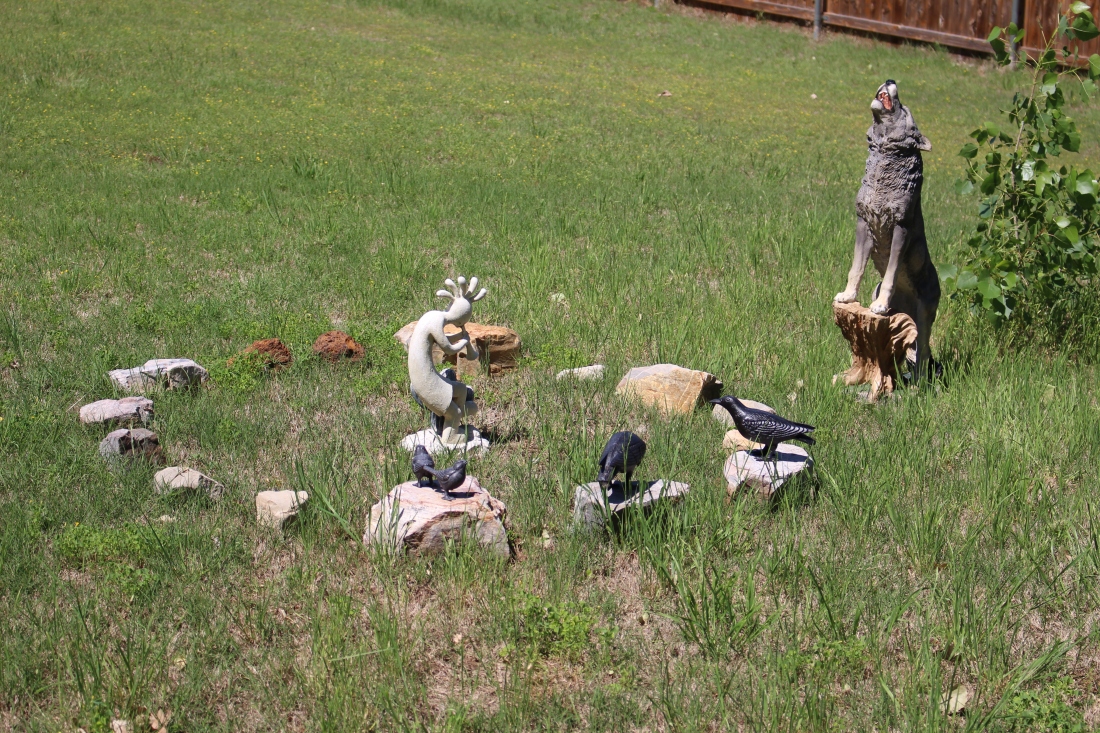